This week we saw a digital asset market that was positive for bitcoin, while altcoins could not confirm this trend.

With Bitcoin’s price consistently trending below its 200-day moving averages and heavy selling identified among miners, some analysts are bracing for further bearish momentum. he downward momentum comes as bearish indicators continue to stack up for Bitcoin, with popular analyst William Clemente III identifying that miners sold more than 5,000 BTC over the past week — worth roughly $164 million at current prices. 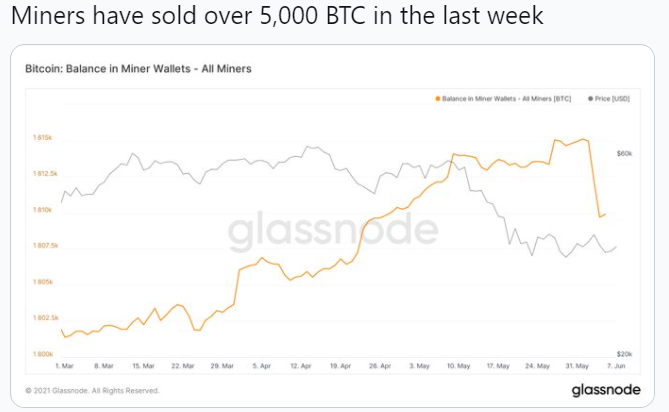 The Purpose Bitcoin exchange-traded fund has been reaccumulating BTC since mid-May, a sign that investors are keen to buy the dip. Demand for Bitcoin (BTC) among Canadian investors has not wavered amid the latest price correction, offering further evidence that market participants are capitalizing on heavily discounted prices.
The Purpose Bitcoin ETF, which launched in February, has now accumulated 19,692.149 BTC as of June 13, according to Bybt data. The ETF has added 284.51 BTC over the past seven days and nearly 2,000 BTC since May 15.

On-chain data suggests bitcoin is going through a December 2018 and March 2020-style recovery. Bitcoin (BTC) is still below a key moving average, and that’s “not a bullish sign,” a new report says, but signs of a recovery have finally arrived.
In its latest market update released on Friday, trading suite Decentrader highlighted three on-chain indicators that suggest an imminent bullish continuation for BTC/USD. Bitcoin has now spent nearly a month below its 200-day moving average (DMA). This is worrisome, warns Decentrader, and external factors such as geopolitical sentiment continue to weigh on sentiment.
“Bitcoin has kept the market on its toes as it continues to fluctuate between weekly support at $32,000 and near-term resistance at the 200DMA, currently at $42,000,” summarizes the update.

On-chain data: describes current developments in blockchain. Often, price changes in the near future can be derived from this data.

Bullish outlook: $40,000 established as support in the long term would fundamentally strengthen the market.