This week we saw a digital asset market that continues to be stuck in the trend channel of consolidation and has not been able to make any major bounces.

The payment service provider Square will develop its own hardware wallet for Bitcoin (BTC). This was announced by Twitter boss Jack Dorsey, who is also Square’s CEO, and the company’s lead hardware developer Jesse Dorogusker on his social network.
The successful entrepreneur and Bitcoin fan had already hinted at the idea of a Square hardware wallet and an associated depository service last month, which was now followed by confirmation that these plans will also be put into practice.
Dorsey had already defined the term “assisted self-custody” in more detail last month. By this, Square means that crypto users should manage their Bitcoin themselves via hardware wallet as far as possible, with this process being technically simplified or supported by the payment service provider.

The market-leading cryptocurrency Bitcoin is unusually low below the much-cited forecast model, which could be a favorable buying opportunity. Bitcoin (BTC) has never been so far behind its forecast price target as it is currently, at least if the stock-to-flow (S2F) calculation model is anything to go by.
Thereby, the S2F is considered to be probably the most reliable forecasting model for Bitcoin, which has predicted the price development with amazing accuracy so far. Even any deviations have not been strong enough to invalidate the model so far.
Currently, BTC/USD is putting the stock-to-flow to a real acid test, as forecast and reality have never been so far apart as they are at the moment.
“The negative divergence from stock-to-flow is currently the highest it’s been in Bitcoin’s history, so if you go by the model, this is a great buying opportunity.” 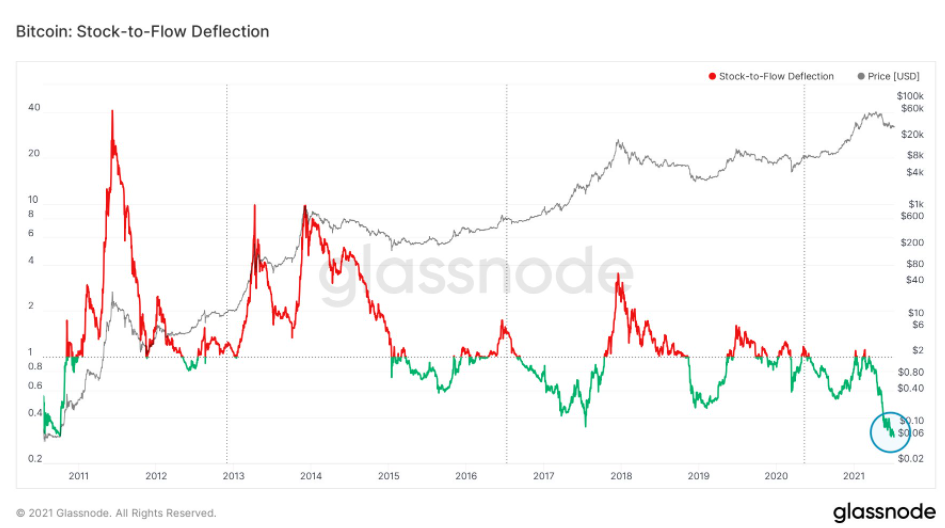 CoinShares said in its weekly report that institutional managers are now investing in crypto funds again after four weeks of only selling. After the longest period of consecutive sell-offs since February 2018, we can now observe that institutional managers are among the biggest buyers of digital assets in the past week. This raises a bit of hope that the crypto market can turn around after considerable volatility.
Inflows into digital asset funds focused on bitcoin (BTC), ether (ETH) and others totaled $63 million in the week ended July 2, CoinShares said in a recent report. It was the first time in nine weeks that inflows were seen in each digital asset with its own funds.
Funds focused on bitcoin saw weekly inflows of $38.9 million. This brings the year-to-date total to $4.186 billion. CoinShares revised the previous week’s total to include a small increase in net investments as well.

Mining rig: A combination of many individual mining devices into one large one. Often operated by companies to mine bitcoins as effectively as possible.

Bearish outlook: A loss of the current trend channel would lead to further selling pressure.